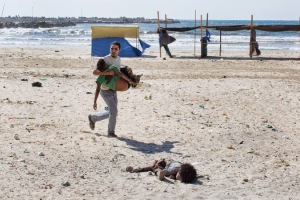 So, no surprise here. In a small almost passing footnote to another season of Israeli genocide, predictably the IOF has once again absolved itself of another civilian slaughter-it always does. The proverbial fox watching the chicken coop.

This time it was the targeted murder of four young boys on the beach in Gaza. Their crime- being four young boys on a beach in Gaza. Nothing more. No weapons, no stones, no militant plans, not even bad thoughts. Just kids being kids. In Palestine its more than enough to get you butchered by the IOF and more than enough for the IOF to “investigate” and, of course, clear itself of any wrongdoing. Kids being kids . . .

Before this particular slaughter I think it was a hospital filled with the wounded and sick. Or was it a university with students and books, or an ambulance with casualties, or a fishing boat with fish, or a fire engine racing to a rescue, or a journalist reporting the news, or a UN shelter filled with terrified refugees? Or was it a multi-story apartment building with three generations of the same family wiped out while cowering for safety inside- dozens exterminated, without the gas, because they ignored the two minute IOF “warning” – 67 years of genocide and counting.

In Gaza, the list of civilian targets is endless. Israeli atrocities the norm. The martyr’s cemeteries overflow as monuments to the living- many of whom wish they had not themselves survived.

In Palestine the trail of civilian death and destruction rages on and on pock-marked all the way with the bodies of the young and old and women and infants alike; the innocent whose only crimes were to breathe Palestinian air, to dream Palestinian dreams and to pray that some where some time the shine of justice and freedom would find its way to a Nation and a People victimized like no other these many years- 67 years of genocide and counting.

Like the lawyer who seeks understanding for her young client convicted of murdering his parents because he is now an orphan, Israel continues to butcher civilians with impunity; always, of course, as so much the victim itself. “If only she didn’t wear that skirt . . . or smile at me” pleads the rapist.

However, lest I be accused of being too glib or harsh, its not easy to be a world-class war criminal these days. It takes real commitment to evil, hard work and lots of practice. As the world knows, but ignores, its something that the IOF has proven time and time again that its really accomplished at- whether in Palestine, Lebanon or who knows where else. Surely, Israeli generals, their patron politicians and immigrant cheerleaders pay a steep price for what has now become an almost annual rite of deadly passage for the IOF in Gaza. Indeed, with each new outrage — no, Palestinian bloodbath– Israelis have, after all, been known to lose some sleep, ail with bouts of indigestion and even, on occasion, miss dance recitals of their children and grandchildren alike. And what of those poor traumatized settlers who this past summer picnicked and applauded from hilltops overlooking Gaza as each new cluster or phosphorous bomb exploded or lit up the sky sowing mayhem among some two million defenseless and impoverished people below.

To find joy in the fear and suffering of so many others speaks volumes not just about these particular depraved settlers, but even more so the vanished soul of a society that has long since forfeited whatever seat it may have once been entitled to at the table of humanity- 67 years of genocide and counting.

Make no mistake about it, the IOF does not deny that it murdered these boys. Nor does it deny specifically targeting the small beachside cafe in which they took refuge and which was destroyed not long thereafter by a massive bomb dropped from a U.S. supplied F-16, flying some thirty thousand feet above the long destroyed Gaza skyline. In fact, Israel does not even seek forgiveness for this unforgiveable act on the grounds of faulty intelligence as to what the cafe was or who was in it, as it has on occasion in the past.

No, the days of mea culpa and atonement are to the IOF but mere relics today, very much like the international law judgments rendered against their military cousins of some 70 years ago at the Nuremberg Tribunals when Nazis were held accountable for their own war crimes. Today, Israel has mastered the blame game in which Gazan civilians are simply always in the wrong place at the wrong time and thus fair, but unfortunate, game.

But what, one might ask, of the Israeli claims that “terrorists” from Hamas or other uniquely Palestinian national liberation movements willingly endanger their own communities because they intentionally secrete themselves or weapons among the broader civilian communities. Putting aside the fact that there is no reliable support whatsoever for this frivolous and self-serving invention of Israeli hasbara, where have we heard this claim before? Was it not the excuse to level Fallujah after an attack by resistance fighters upon several military contactors in that city? Did the U.S. not subject all of that Iraqi seat of resistance to an aerial and ground assault involving almost thousand airstrikes including the use of Gatling guns firing 1,800 rounds per minute with ambulances bombed and civilians executed by snipers including some waving white flags? Does it not have the same deadly ring as Israel’s excuse for specifically targeting civilians throughout Lebanon in 2006 in an admitted effort to turn the Lebanese civilian population against Hezbollah following a cross-border incident with that group? Indeed, in the days that followed, Israel undertook some 7000 air strikes that specifically targeted airports, bridges, electrical facilities, seaports, supermarkets, water treatment plants, gas stations and residential areas reducing many neighborhoods to mounds of rubble.

As noted almost a decade ago by then Colonel Dr. Gabriel Siboni in an article for Tel Aviv University’s Institute for national Security Studies:

” With an outbreak of hostilities, the IDF will need to act immediately, decisively,
and with force that is disproportionate to the enemy’s actions and the threat
it poses. Such a response aims at inflicting damage and meting out punishment
to an extent that will demand long and expensive reconstruction processes . . .
Attacks should aim at . . . military capabilities and should target economic
interests and the centers of civilian powers that support the organization.”

Five years later that same distended evil logic would be used by another in justifying the 9/11 attacks that murdered thousands of U.S. civilians:

The idea that civilians bear responsibility for armed groups, fighters or resistance from “within” their own communities and thus, ultimately, upon political decision makers is not new. Israel has wrapped itself tightly in this illegal flag since it was first raised after the Zionist slaughter at Deir Yassin in 1948. Long before this, its patron saint, the U.S. military, waved the same deadly banner to justify attacks upon civilians and civilian infrastructure, including its own, ranging from Sherman’s notorious pillage and plunder across the U.S. South during its civil war to the firebombing that killed hundreds of thousands of unarmed civilians in cities throughout Germany during World War II to the needless and criminal devastation caused to both Hiroshima and Nagasaki by the use of two atomic bombs at the very end of the war with Japan.

Perhaps the next time Israeli generals and architects of its modern “counter- insurgency” program pull up to their headquarters in the midst of the teeming metropolis of Tel Aviv, before they turn the key to the door and go inside, they should stop and take a good long look around its neighborhood and see who their neighbors are. And what of those so-called Israeli civilian public transit buses and cafes that transport and feed not just civilians but active duty IOF soldiers on their way to an occupation zone or a battle. Using Israel’s own criminal view of international law, are they not now legitimate targets as little more than convenient cover for armed and dangerous enemy combatants?

Fortunately for Israel, unlike most of its own, despite all the death and destruction, all the pain and suffering, all the broken dreams and misery, in this battle for justice and freedom, Palestinians have not forgotten either their humanity or decency- 67 years of genocide and counting.

This site uses Akismet to reduce spam. Learn how your comment data is processed.