September 9th is fast approaching- a day that stands out in the celebrated history of domestic resistance against official State terror and institutional slavery in this country. On that day in 1971 thousands of prisoners entombed in an upstate prison in rural New York, perhaps the worst in the United States at the time, said enough as they seized Attica. They said no to slave wages, no to physical abuse and no to psychological torture; they demanded improved living conditions, medical treatment, religious freedom and educational and training opportunities. Most important, they demanded an end to the systemic assault upon their dignity as human beings.

Although much has been written about the take over and ensuing assault on the prison by state police and national guard troops some four days later which resulted in the murder of forty three individuals, including ten hostages, one statement by a 21 year old spokesperson for the inmates, himself later executed by police after they retook the prison, rings no less true or powerful today, some forty five year later:

“We are men! We are not beasts and we do not intend to be beaten or driven as such. The entire prison populace, that means each and every one of us here, have set forth to change forever the ruthless brutalization and disregard for the lives of the prisoners here and throughout the United States. What has happened here is but the sound before the fury of those who are oppressed. We will not compromise on any terms except those terms that are agreeable to us. We’ve called upon all the conscientious citizens of America to assist us in putting an end to this situation that threatens the lives of not only us, but of each and every one of you, as well.”
Elliott James “L.D.” Barkley, 1971

Decades after Attica briefly stunned the all too limited attention span of this country, it remains very much business as usual with millions of Americans mostly women and men of colour locked away largely in rural prisons often for decades for nonviolent drug offenses. Some things about Prison America just don’t seem to change- out of sight out of mind.

Like 45 years ago, today prisons remain cold, cruel crypts- mausoleums designed to crush our spirit, destroy our families and guarantee failure should we ever return to the communities we once called home. We work long senseless, repetitive days typically for one to twelve cents an hour under the ever watchful and abusive eyes of guards who constantly berate us for our “attitude,” or for exhibiting any signs of independence or for the slight of refusing to consider them as superiors by mere virtue of their race and badge alone. In the system of mass incarceration which today is an unbroken web of state and federal prisons that span the country from coast to coast, we toil on as so much scab labor cleaning broken, overflowing toilets, cracked shower stalls and blood spills as very much the norm … a daily ritual of indentured servitude while classrooms remain empty stripped of computers, meaningful training or educational opportunity. For those of us who disdain the label chattel, the loss of good time credit looms large. For others, a visit to the SHU (special housing units) soon becomes home… locked down 24-7 with freezing cold our only constant companion. For the fortunate recalcitrants among us, it “simply” means the loss of family visits or phone, commissary or television privileges.

Although the torture meted out to “Big Black” a respected leader of the Attica rebellion, has largely given way to more subtle pernicious forms of daily collective abuse and humiliation in prisons throughout the country, it is important to recall Black’s description of his torture at the hands of state police and guardsmen after they retook the prison; in these words we get a glimpse of the continuing age old power equation between those that we imprison and those we empower as modern day slave masters:

“Here’s Black, here he is,” and they made me get up, beat me, and beat me into an area of the yard and laid me on the table and put a football under my neck, up under the catwalk, and told me that if it fall, they was going to kill me, and they spit on me and dropped … on me, and went through the torture word, you know, while I was laying there, “Nigger, why did you castrate the officers, why did you bury them alive? We going to castrate you,” and I’m laying on the table spread-eagle, buck naked as they burned me with cigarettes and hot shell casings. But everybody in the yard was naked, the majority of these people, you know, and that went on for, like, three, four, five hours. You know, and right behind me, I’m laying here, and here’s the catwalk, and right here’s the hallway, they had a gauntlet set up and it had glass broke on the floor, and they was running everybody through the gauntlet, beating them — they had 20, 30 people each side — with what they called their nigger sticks.”

In 1971 over 60% of all prisoners in the United Sates were young woman and men of color, the majority of them essentially kidnapped from police occupied urban communities to rural prisons controlled almost exclusively by local white cops. 45 years later, those figures remain largely untouched although the prison population today has exploded by some 400%. While increasing numbers of prisoners are now so-called “white collar” offenders, and older, in both state and federal criminal justice systems throughout the country race, class and politics still remain the prime determinants of who goes to prison and who goes to the club, who becomes the indentured servant and who profits from their servitude.

September 9th, 2016 will be the 45th anniversary of the Attica uprising. For those of us who have been to prison since, who remain entombed there today, or who will most certainly end up in one because of race, class or politics and little else this anniversary reminds us of who we are, where we are, and where we must go if we are to maintain our dignity and humanity. In that spirit the IWW Incarcerated Workers Organizing Committee has released the following announcement of prisoner solidarity calling for a nationally coordinated prison work stoppage for September 9th, 2016:

“On September 9th of 1971 prisoners took over and shut down Attica, New York State’s most notorious prison. On September 9th of 2016, we will begin an action to shut down prisons all across this country. We will not only demand the end to prison slavery, we will end it ourselves by ceasing to be slaves.

In the 1970s the US prison system was crumbling. In Walpole, San Quentin, Soledad, Angola and many other prisons, people were standing up, fighting and taking ownership of their lives and bodies back from the plantation prisons. For the last six years we have remembered and renewed that struggle. In the interim, the prisoner population has ballooned and technologies of control and confinement have developed into the most sophisticated and repressive in world history. The prisons have become more dependent on slavery and torture to maintain their stability.

Prisoners are forced to work for little or no pay. That is slavery. The 13th amendment to the US constitution maintains a legal exception for continued slavery in US prisons. It states “neither slavery nor involuntary servitude, except as a punishment for crime whereof the party shall have been duly convicted, shall exist within the United States.” Overseers watch over our every move, and if we do not perform our appointed tasks to their liking, we are punished. They may have replaced the whip with pepper spray, but many of the other torments remain: isolation, restraint positions, stripping off our clothes and investigating our bodies as though we are animals.

Slavery is alive and well in the prison system, but by the end of this year, it won’t be any more. This is a call to end slavery in America. This call goes directly to the slaves themselves. We are not making demands or requests of our captors, we are calling ourselves to action. To every prisoner in every state and federal institution across this land, we call on you to stop being a slave, to let the crops rot in the plantation fields, to go on strike and cease reproducing the institutions of your confinement.

This is a call for a nation-wide prisoner work stoppage to end prison slavery, starting on September 9th, 2016. They cannot run these facilities without us.”

The United States has less than 5% of the world’s population but more than 25% of its prisoners. Every decade we lock away millions of women, men and children in penal institutions ranging from high security prisons, to camps, to halfway houses to immigration facilities, to pre-trial and home detention settings. Millions of others are under daily supervision by probation, parole, or pretrial release officers under unnecessarily stringent and counterproductive requirements that accomplish little but damage already fragile homes and families, destroy employment opportunities and render futures little more than wishful thinking. But the suffering of others has always been a core component of the American dream, one that places profit before people, especially those of colour, the poor, and the dissident. Occasionally inmates rebel and become socially and politically visible. That’s what happened at Attica.

This September 9th all across the United States prisoners will once again become socially and politically visible and, in so doing, necessarily vulnerable. For those of us on the outside we must ensure that our brothers and sisters, mothers and fathers, and children languishing, but not forgotten, behind the deadly walls of silence saying no to penal slavery and abuse understand that they are not alone. To those that imprison and seek to enslave them they too must know that we will hold them accountable; that we will not forget our families and friends leaving them to the mercy of a cruel cold economic system that exploits and benefits from each scream in the middle of the night whether from a maximum security SHU or the bunk of a privatized halfway.

On September 9th as a sign of support and solidarity, shut the shit down. From coast to coast refuse to go to school or work-no business as usual. Hold teach-ins, sit-ins and demonstrations. Peacefully block prisons, halfway houses, courts, police departments, government offices and the corporate headquarters of prison profiteers. Send an unmistakable and loud message to the imprisoned and those who profit from mass incarceration and penal slavery, that the road home in a just and fair society is not more mass incarceration but economic and political justice. 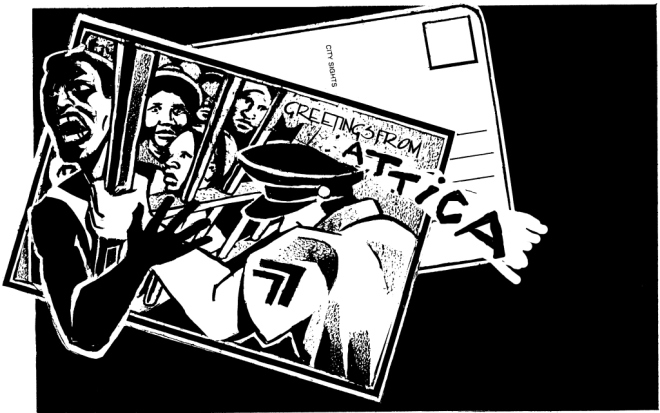 The above commentary on the Nationally Coordinated Prison Work Stoppage beginning September 9th, 2016 was composed by Stanley L. Cohen , formerly known as 19846 052

Drawings by Seth Tobocman, originally published in “You don’t have to fuck people over to survive.” Other books include “War in the neighborhood,” “Disaster & resistance” and “Len.”